On April 29, students from the Sonoraville FBLA spent their morning at local Belk stores selling tickets for a charity sale. Students were asked to approach entering customers and sell $5 tickets. Many different charities and nonprofits worked the events, and all of the proceeds were split evenly between the groups. Students greatly benefited from the event and learned good marketing skills.  The main purpose of this fundraiser was to earn money for March of Dimes. 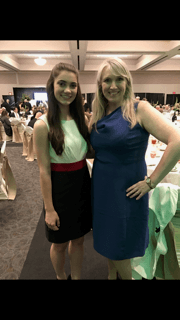 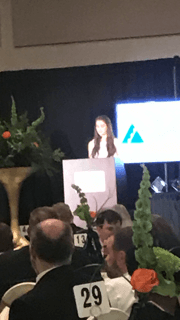 Sonoraville FBLA’s Adviser Lisa Smith and President C. Farist recently attended the Junior Achievement (JA) Hall of Fame banquet held on March 30, 2017 at The Northeast Dalton Trade and Convention Center. The event recognized distinct leaders and supporters of the JA program with a ceremony to honor the three individuals, followed by dinner. Farist introduced one of the Hall of Fame award recipients, Mr. John Neal of Dalton, who has contributed so much time and money to this organization and is a very proud supporter. Smith and Farist had the opportunity to network with others who are heavily involved in JA, as well as those who were awarded. Smith has been involved with JA since 1998 and yearly has volunteers to co-teach JA in her classroom. 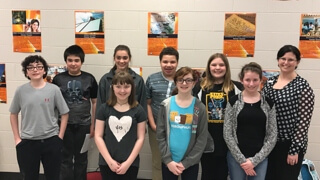 On March 27, Sonoraville High School FBLA assisted local community leader, Stacey Long, present a workshop for Red Bud Middle School FBLA. Ms. Long opened the workshop by having students properly introduce themselves to each other, noting the correct way to give a handshake and the importance of eye contact. Sonoraville leaders assisted in this process and helped the RBMS future leaders. Students learned the fundamentals of public speaking, including impromptu and extemporaneous. They learned key tips on how to succeed when competing in these events, but also how to effectively present in areas outside of competition (such as networking). After learning what it takes to make a great speech, the members implemented their new knowledge and actually presented two of their own speeches. SHS FBLA provided feedback and pointers for even better speeches. Students left feeling confident in their newfound speaking abilities!

Sonoraville High School Future Business Leaders of America recently participated in hosting the Annual Optimist Reality Store. Approximately 575 students from Sonoraville, Gordon Central, and Calhoun High Schools participated in the event. Our schools are committed to seeing that our youth become aware of the importance for all adults to lead balanced, self-sufficient lives. The Optimist Reality Store is designed to encourage teens to think about their future and to help them visualize how their educational and career choices will affect their economic well-being. Participation in the Optimist Reality Store helps students learn about their choices, evaluate their options and plan for their future. We are greatly appreciative of the Gordon Optimist Club’s continued support of this meaningful event.