Recently, twenty-three Emanuel County Institute FBLA members traveled to the Fall Leadership Conference held in Athens, Georgia on November 15-16 at the Classic Center. On this trip, members were able to participate in many fun activities, such as team building and problem solving at Escape the Space and touring the downtown Athens. Aside from the fun and touring of Athens, FBLA members were given the opportunity to attend different leadership workshops, meet new people, prepare for competitions, and even play Monopoly against other FBLA chapters! While at the Classic Center, all members and advisers attending were able compete for the Statesman Award and Battle of the Chapters. Students receiving this honor were Kati-Brooke Hooks, Sarah Beth Kersey, Caroline Kraus, Calissa Mason, Molly McBride, MacKayla Oglesby, Roesha Passmore, Kendra Pierce, Andrea Pullen, Lauren Sherrod, and adviser, Mrs. Jessica Smith.  The Battle of the Chapters team consisted of Breana Librizzi, Kati-Brooke Hooks, and MacKayla Oglesby. During the general session, those in attendance were able to listen to an awesome guest speaker, Stephen Mackey. Mr. Mackey travels the country speaking to multiple groups.  He was born a hard life but proved that that with hard work and the right attitude anything is possible.  He stated to the group that, “If you don’t hear opportunity knock, build a door for opportunity to knock on!”  All members had a great time at the conference and are excited for the upcoming competition season!  Also attending the conference was chaperone Mrs. CeCe Pullen. 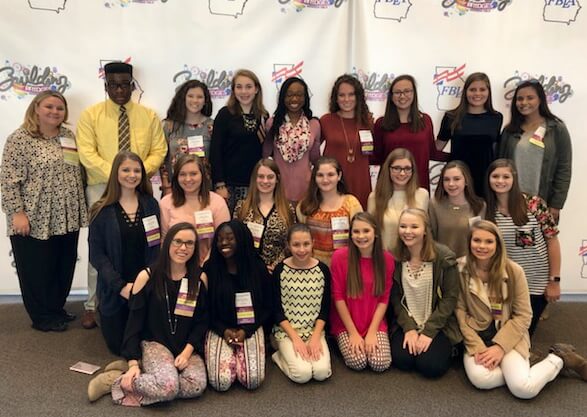